Winner of the Associated Writing Programs Award for Creative Nonfiction.

The pieces gathered in this book are essays, by which I mean they are experiments in making sense of things, and they are personal, by which I mean the voice speaking is the nearest I can come to my own voice. For me the writing of a personal essay is like finding my way through a forest without being quite sure what game I am chasing, what landmark I am seeking. I sniff down one path until some heady smell tugs me in a new direction, and then off I go, dodging and circling, lured on by the calls of unfamiliar birds, puzzled by the tracks of strange beasts, leaping from stone to stone across rivers, barking up one tree after another. The pleasure in writing an essay—and, when the writing is any good, the pleasure in reading it—comes from this dodging and leaping, this movement of the mind.

It must not be idle movement, however, if the essay is to hold up; it must yield a pattern, draw a map of experience, be driven by deep concerns. The surface of a river is alive with lights and reflections, the breaking of foam over rocks, but underneath that dazzle it is going somewhere. We should expect as much from an essay: the shimmer and play of mind on the surface and in the depths a strong current.

Most of the fashions in fiction of the past twenty years have led away from candor—toward irony, satire, artsy jokes, or close-lipped coyness, anything but a serious, direct statement of what the author thinks and feels. If you hide behind enough screens, no one will ever hold you to an opinion or demand from you a coherent vision or take you for a charlatan. The essay appeals to me because it is not hedged round by these literary inhibitions. You may speak without disguise of what moves and worries and excites you. If the words you put down are foolish, then at least everyone knows who the fool is.

Reading back through this book, I find myself brooding in essay after essay on the origins of violence, especially that collective madness we call war; on the ways we inhabit the land; on our fellowship with animals; on the use of hands; on the tangled legacy of maleness; on the mysterious gravitation of love. But such an abstract listing of themes is misleading, for the essays themselves deal only in the concrete and particular. They are narratives; they speak about the world in stories, in terms of human actions and speech and the tangible world we inhabit.

"The Inheritance of Tools" was selected for Best American Essays 1987

Praise for The Paradise of Bombs:

"In these eleven essays, knowing about the world is not an intellectual exercise but a sensation, or a chain of sensations, told by a troubled intelligence. . . . They give the reader more evidence than a poem and more intention than a story, more detailed substance from more angles than either poetry or fiction would." --Kim R. Stafford, The New York Times Book Review

"Will captivate anyone who wants to feel the pulse of our era." --William J. Schafer, Louisville Courier-Journal 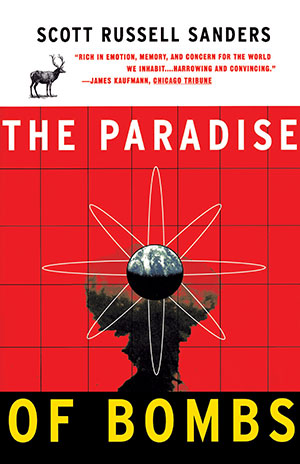 In The Paradise of Bombs, Scott Russell Sanders writes of a world both beautiful and vulnerable. He tells of hikes above the clouds on mountain trails, of expeditions in the predawn chill to hear the calls of owls, of fathers teaching their sons to hammer nails and miter joints. But Sanders also writes of the destructive urges that drape the world's splendors in a mesh-work of fear, luring men to caress guns and fantasize over war, populating toystore aisles with muscular plastic heroes and their faceless sworn enemies, concealing nuclear arsenals amid the peace of glistening forests.

Both reflective and probing, Sanders's essays weigh what lies on the surface of life but also seek the deeper currents that guide our actions and thoughts and form our history. Recalling a youth spent within the wooded boundaries of the enormous arsenal in Ohio where his father worked, "At Play in the Paradise of Bombs" describes how childhood afternoons playing at war against the "Japs" and "Nazis" gave way, as adolescence approached, to the dry-mouthed anxiety of the Cuban Missile Crisis. "Coming from the Country" contrasts the unassumingly self-reliant values of the people that city dwellers call "hicks" with such skills of urban life as knowing how to hail a cab, order dinner from an elaborate menu, mix complicated drinks, and find people who can be paid to repair things. "Digging Limestone" and "In Stone Country" find traces of our elemental passions and dreams in the quarries and rocky outcroppings of southern Indiana, in the ancient fossils transfixed in a slice of stone, the opaque depths of the lakes left by abandoned limestone pits, and the gargoyles and filigree carved by the stonecutter's air-powered chisel.

Today, the chain-link fence that surrounded the Ohio arsenal seems to have expanded to encircle the entire planet in its volatile grip. In a world caught in the cross hairs of potential devastation, these essays speak of the pleasures of daily living and the mysteries of our nature that propel us toward life but also toward destruction.