A sample from the chapter entitled "Writer":

Why I had chosen the writing trade was a mystery to my father, and it remains largely a mystery to me.  I never expected to earn a living from it.  No teacher had ever urged me to it.  No editor asked for my work.  There were no writers in my family, none in the places where I grew up.  I didn’t meet a writer in the flesh until I was in college, and the few whom I did eventually meet while at Brown seemed arrogant or aloof.  I’ve since come to understand that what struck me as arrogance or aloofness may only have been the armor they put on to defend themselves from the earnest attention of readers and  would-be writers, like that younger version of myself.  But at the time, I saw nothing in those writers to attract me, no glamor, no glint of wisdom, no shadowy depths.

I didn’t take up the writer’s trade because I wished to cut a certain figure in the world, nor because I wished to satisfy the adults who had charge of my education.  I took up writing for the same reason a music-besotted youngster begins playing the piano or guitar—because I wanted to try my hand at the art that gave me such keen pleasure.  I can’t explain why I felt from the beginning such a passion for language, why I collected words, why I begged my sister to give me the secret of reading so soon after I had learned to talk.  I can’t explain why I worked my way through shelf after shelf of books at the library while hardly any of my childhood friends bothered to read.  Nor can I explain why the making of stories opened paths for me through the dark woods of bewilderment, nor why, all these years later, it still seems to me such necessary work.

What I do know is that writing is my slow, stubborn way of asking questions, tracing the contours of feelings, thinking about what moves and troubles me.  And I know that my impulse to write is bound up with my desire to salvage worthy moments from the river of time.  Maybe all art is a hedge against loss.

In his usual articulate and well-crafted prose, Sanders, author of over 20 books and numerous essays, continues to relate everyday and natural experiences to greater meanings. This addition to the publisher's "Credo" series includes an essay by Sanders describing how he became a writer, a biographical study of Sanders by Scott Slovic, and an extensive bibliography of Sanders's work. Sanders ties incidents from his life to his beliefs and development as an author. Recalling a time when he was lost in a farm field as a child, for instance, he concludes: "Unlike my father, I admit to having been well and truly lost....Instead of panicking, I try to welcome these moments...be still, and discover where I am." His writing, he says, is his way of asking questions and thinking about what troubles him; it is what makes his fleeting moments of insight durable. --Library Journal

The country of language, in nature essayist and science-fiction writer Scott Russell Sanders's happy phrase, is the land that humans enter when, early in life, they learn to put words to things. Sanders writes with fine, measured humor of his passage into that terra incognita through episodes involving snakebite, guns, insects, and the other facts of life of his childhood along the Mississippi Delta and, later, in the woods of Ohio. Those episodes, he allows, may not have taken place just as he recalls them; after all, he was just a child, and "memory is a trickster, shifting shapes, playing jokes, reworking the past." True or not, they showcase Sanders's considerable abilities as an interpreter of the natural world and as a storyteller, abilities that have given birth to such fine books as Stone Country and Staying Put.--Gregory McNamee, Amazon.com 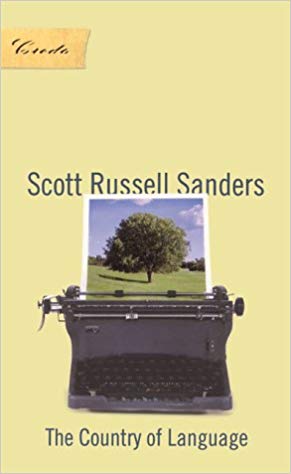 Scott Russell Sanders speaks on behalf of a life rooted in the commonplace, in what is becoming paradoxically rare: a sense of "at-homeness" in the natural world. In The Country of Language, Sanders recalls the stories and experiences that have guided him as a writer. Emerging from all his work is the conviction that moments of interaction with the nonhuman world--whether one is transfixed in a silent state-down with a great blue heron or listening to the voices of a creek while bombs threaten far-off countries--restore the sanity and courage needed to address the griefs of the human community.

Books in the Credo series from Milkweed Editions explore the essential goals, concerns, and practices of contemporary American writers whose work emphasizes the natural world and human community.