How the novel opens...

From the moment he opened his cabin door and found a coiled blacksnake asleep on the stoop and heard warblers singing, out of season, in the sycamores by the creek, Ely Jackson knew in his bones that today was no day for stirring abroad. Two bad signs at once. Maybe this war had turned the whole of creation sour. On such a day a fellow had better lie low, not go hunting a lost brother. With the toe of his moccasin he nudged the snake until it slid away into the grass. Then he stood watching the woods fill up with light, listening to the warblers. Didn't the fool birds know it was August? The sun was barely up, but already sweat beaded on Ely's forehead and stung the corners of his eyes.

He was about to go inside and fry some turkey for breakfast when a harsh cry cut through the birdsong, like the screech of a file against a sawblade. What on God's round earth was that? The birds hushed. He stiffened, held his breath. The screech came again, from up the path toward the village. The only soul within calling distance up that way was the spice girl, who lived by herself in a hut made of woven branches. Thought of the girl and her green eyes made Ely snatch his gun, saddle his horse, and take off riding to see what the trouble was.

Could be a bear or panther scaring her, could be a runaway soldier, or some of those Indians the English sent from Detroit after scalps. His chest seized up with the terror she must feel, a lone girl like that. No family around, no friends that Ely had ever noticed. Could she even shoot a gun? Maybe she cast spells, like people said. She was around his age, seventeen or so, and like him she was an orphan. Some folks called her Marie Antoinette Rozier, after her white father, a Frenchman; others called her Rain Hawk, after her Shawnee mother. Ely had never called her by any name, had never spoken a word with her; but whenever he passed her place he stopped on the trail and hid behind the elderberry bushes to listen if she was singing.

From the Afterword to the new edition:

On the frontier, that ragged margin where settlers of European descent met the wilderness, anything seemed possible. There were stories about seven-foot-long human skeletons dug up from the burial mounds of the Ohio Valley. There were stories about girls kidnapped from cabins and married off to bears. There were stories about blue-eyed, blond-haired Indians who spoke Welsh. There were stories about the lost tribes of Israel, survivors from Atlantis, strayed Vikings, and giants, all wandering out there in the wilds. When President Jefferson sent Lewis & Clark to find a route to the Pacific in 1803, he instructed them to watch for woolly mammoths, whose bones had been found in the salt licks of Kentucky. A decade later, just when the events recounted in Bad Man Ballad were unfolding, John James Audubon thought he heard the bellowing of these great beasts from canebrakes on the lower stretches of the Ohio River. Who could say what creatures lurked in the deep woods, the rolling prairies, the distant mountains?

Even as a boy, I sensed that the defining fact of our nation’s history was the war against wilderness—against native people, against predators and varmints, against shadowy forests and unbroken grasslands, against free-flowing rivers and overflowing swamps, against heat and cold and bugs and disease, against any creature or scruple or force that would thwart our ambition or defy our control. And what was our ambition? To create for ourselves and our children a land of milk and honey, a new Eden, prosperous and comfortable and safe. In pursuit of that goal, our ancestors enslaved millions of Africans, waged war at home and abroad, imprisoned dissidents, all the while proclaiming that the Creation exists purely to serve us, to fill our bellies with food, our eyes with scenery, our pockets with money.

I hoped that the “Ballad” in my title would give me license to let my story roam beyond the bounds of strict realism, as folksongs do. The skirmishes and the movements of militias are faithful to the historical record, and so is the atmosphere of dread that envelopes the settlers, but nobody living where my fictional Roma is located could have heard the thundering of guns from Perry’s battle on Lake Erie. You’ll find on a map of frontier Ohio nearly all of the places the deputies pass through, but don’t go looking for Door-in-Rock, the cave where they catch up with the giant. The artifacts that Bear Walks shows to Ely are the sorts of things found in burial mounds along the Ohio River, and there are plenty of caverns in the limestone of southern Indiana, but the catacomb in my novel is imaginary. Some of the feats attributed to the giant by people who met him along his path might easily have occurred, while others belong to legend. With luck, this great and mysterious man, who occupied my imagination for so many years, will live on after me in that borderland where history gives way to myth. 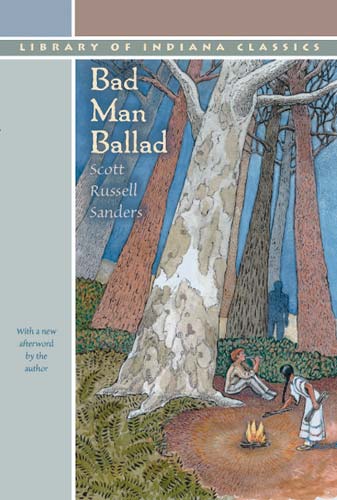 The huge, shambling man has left behind him a trail of rumors and names: Bearman, Ironman, mongrel Indian, giant. Now the name of murderer echoes through the wilderness, for in his path is discovered the grotesque, bone-crushed body of a dwarf.

Two odd partners volunteer to track down the giant and bring him back for trial: Ely Jackson, a backwoods youth who is searching for his one surviving brother; and Owen Lightfoot, a lawyer from Philadelphia with a romantic's view of the frontier and a city man's dread of beasts and shadowy forest. They are joined in the hunt by an even stranger partner, the halfbreed girl whom some call Mademoiselle Rozier and others call Rain Hawk. She is the one who last saw the dwarf alive, who understands the giant's mute language of hands, who knows the ways of the Old People.

The time is 1813, during America's last war with England; the place is the Ohio Valley, the thickly wooded, hilly, creek-carved highway of western settlement. Wolves still howl at midnight on village greens. Each log cabin is a fortress, and no one travels without knife and gun. Through this armed and fearful countryside, the three partners chase their awesome quarry, each one driven by a private passion. What they encounter is a creature who surpasses their imaginings.

This epic novel shares with Mark Twain's Adventures of Huckleberry Finn a splendor of language, a peaceable spirit, a summoning to brotherhood. "Brother" in fact becomes Ely's name for the giant--that mystifying outcast whose footprint in the mud holds both of Ely's boots and leads him such distances into myth.