I never expected to write a memoir. But then my mother fell into her final decline, of mind and body, just as my first grandchild entered the world. Watching my mother fade and my granddaughter grow, I felt moved to tell their story, and my own...

When Scott Russell Sanders was four, his father held him in his arms during a thunderstorm, and he felt awe—"the tingle of a power that surges through bone and rain and everything." He says, "The search for communion with this power has run like a bright thread through all my days." A Private History of Awe is an account of this search, told as a series of awe-inspiring episodes: his early memory of watching a fire with his father; his attraction to the solemn cadences of the Bible despite his frustration with Sunday-school religion; his discovery of books and the body; his mounting opposition to the Vietnam War and all forms of violence; his decision to leave behind the university life of Oxford and Harvard and return to Indiana, where three generations of his family have put down roots. In many ways, this is the story of a generation's passage through the 1960s—from innocence to experience, from euphoria to disillusionment. But Sanders has found a language that captures the transcendence of ordinary lives while never reducing them to formula. In his hands, the pattern of American boyhood that was made classic by writers from Mark Twain to Tobias Wolff is given a powerful new charge.

Praise For A Private History of Awe…

Letter to Scott from Wendell Berry:

I finished your book last night and I think it is splendid. Much in it is authentically beautiful, and it is beautifully and properly titled. It has gravity and pleasure and candor and gratitude and sorrow, all eloquent, and never a moment of ungenerosity. Every return of the theme of your love for Ruth put tears in my eyes. You matter so much to me that I have no idea what others will think of this book, but it is light and breath to me. Our poor country needs this book more than it knows, and I am anxious to find out how it will be received. 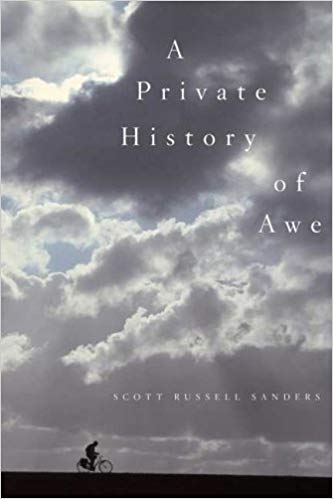 Bruce Bonta, "A Faith in Love, Life, and Peace: a review of A Private History of Awe from Peaceful Societies: Alternatives to Violence and War.

Order from the Publisher